Posted by Ken LeBrun at 9:29 AM No comments:

Posted by Ken LeBrun at 8:38 AM No comments:

In Jeremiah 31, God makes promises to Israel in unconditional language. This is the new covenant passage that is quoted twice in the book of Hebrews. This covenant is made "with the house of Israel, and with the house of Judah." Jeremiah 31:31.
God's unconditional commitment to Israel is brought out in verses 35-37. Speaking of the sun, the moon, and the stars, God says, "If those ordinances depart from before me, saith the Lord, then the seed of Israel also shall cease from being a nation before me for ever." Then He says, "If heaven above can be measured, and the foundations of the earth searched out beneath, I will also cast off all the seed of Israel for all that they have done, saith the Lord."
Some of God's promises to Israel were conditional upon their response to Him. But this passage makes it clear that His selection of them as His people is permanent, in spite of "all that they have done." Their behavior cannot change His choice of them as His covenant people.
Popular "replacement theology" teaches that the Christian church replaces the Jewish nation as God's covenant people. But the Bible does not teach that. The Bible makes it clear that in order for Gentiles to experience the blessings of the new covenant they must be grafted into Israel. Not the modern nation of Israel, but the kingdom of David, for Jesus will sit on David's throne.
For a more complete study of this subject see "'Thy People' and the Remnant of Israel" posted on May 21, 2019.
Posted by Ken LeBrun at 8:39 AM No comments:

Bible prophecy foretold conflicts among the nations leading up to the second coming of Christ. Here is a chart placing some of those conflicts in relation to other prophetic events in Daniel and Revelation. 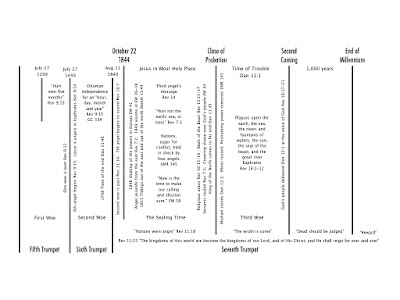 Posted by Ken LeBrun at 1:41 PM No comments:

"Thy People" and the Remnant of Israel

Gabriel’s reference to “thy people” throughout the book of Daniel consistently applies to the posterity of Jacob. The expression in Daniel 12:1 does not refer to some other group. Christianity does not replace Israel in God’s plan; it renews and strengthens it.

To understand this better, read the article, "The Restoration of Israel".
Posted by Ken LeBrun at 12:46 PM No comments:

In preparation for the Daniel 11 Prophecy Conference I want to make it easy for you to find all my material on Daniel 11. Just click here to be directed to my August 24, 2015 post where I maintain an up-to-date index of everything on this site related to Daniel 11.
Posted by Ken LeBrun at 9:37 AM No comments:

That's right. You no longer need to type klebrun.blogspot.com. From now on all you have to do is type thougthlines.org into your browser. I don't know why I didn't realize I could assign a custom domain name to this blog. Anyway, I hope you appreciate it.

There is a lot of information on this site. You can either click through all the archives listed by date on the right to see all the posts. Or you can search for a topic in the search bar at the top. Some of the searchable topics I've posted on include:

Some of the linked files in my blog posts are on a server that no longer allows public access. I apologize for that. I plan to get around to fixing that eventually. But in the meantime, if you click on a link and it doesn't take you there, let me know in the comments and I'll fix it for you.

Happy Reading!
Posted by Ken LeBrun at 12:05 PM No comments: