In preparation for the Daniel 11 Prophecy Conference I want to make it easy for you to find all my material on Daniel 11. Just click here to be directed to my August 24, 2015 post where I maintain an up-to-date index of everything on this site related to Daniel 11.
Posted by Ken LeBrun at 9:37 AM No comments:

That's right. You no longer need to type klebrun.blogspot.com. From now on all you have to do is type thougthlines.org into your browser. I don't know why I didn't realize I could assign a custom domain name to this blog. Anyway, I hope you appreciate it.

There is a lot of information on this site. You can either click through all the archives listed by date on the right to see all the posts. Or you can search for a topic in the search bar at the top. Some of the searchable topics I've posted on include:

Some of the linked files in my blog posts are on a server that no longer allows public access. I apologize for that. I plan to get around to fixing that eventually. But in the meantime, if you click on a link and it doesn't take you there, let me know in the comments and I'll fix it for you.

Happy Reading!
Posted by Ken LeBrun at 12:05 PM No comments: 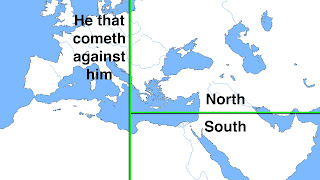 A little over a year ago I was introduced to Dr. Roy Gane's contribution to the study of Daniel 11:16-22. Since then, I have carefully compared his views with the traditional Adventist application of those verses. In this post I will share my analysis of it. For Dr. Gane's actual presentations, see:


The guiding principle that has most influenced my analysis of these verses is William Miller's 4th rule of prophetic interpretation:

"To understand doctrine, bring all the scriptures together on the subject you wish to know; then let every word have its proper influence, and if you can form your theory without a contradiction, you cannot be in an error." Joshua V. Himes, Views of the Prophecies and Prophetic Chronology Selected From Manuscripts of William Miller With a Memoir of His Life (Boston: Joshua V. Himes, 1841), 20.


In contrast to this, there are no contradictions to be found in the application of verses 17-22 as Dr. Gane has proposed. It just fits.

Side-by-Side Comparison of the Two Views

Who is the King of the South?

I have been invited to speak at the Daniel 11 Prophecy Conference to be held October 19-20, 2018 at the Village SDA Church in Berrien Springs, Michigan. Event information is at http://www.daniel11prophecy.com.

The stated purpose of this conference is "to provide a forum for the public hearing of the leading King of the South (KOS) interpretations of Daniel 11:40ff; to stimulate further study among church members on eschatological prophecy; and to raise awareness among church members of where we are in the broad flow of salvation history."

While the focus of this conference is on the King of the South, that is just a convenient way of categorizing the views to be presented. Each speaker will present his position in the context of the broader interpretation of Daniel 11 as a whole.

I will be speaking on Sabbath afternoon. The paper I will be presenting is entitled, "Identifying the King of the South Through a Natural Reading of Daniel 11." The full paper is posted under "Conference Papers" on the event website and is available now to read. Click here to view and download.

Posted by Ken LeBrun at 9:20 AM No comments: