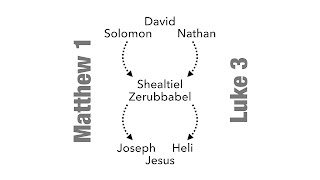 Luke 3:23 in the Greek doesn't actually say that Joseph was the son of Heli. The words "the son" in the KJV are italicized, indicating they were supplied by the translators. The Greek literally says, "And Jesus Himself was beginning to be about thirty years old, being, as was supposed, son of Joseph, of Heli." It was supposed that Jesus was the son of Joseph, but really he was "of Heli."