Jesus' prophetic forecast, recorded in Matthew 24, Mark 13, and Luke 21, may be divided into five chronological periods:

Jerusalem was destroyed in AD 70. The signs of the end came in 1780 and 1833. The part we are focusing on here is the period between those two points, a period I am calling "The Church Under Persecution."

The key expressions to look for in this section are "tribulation," "affliction," "those days," and "the times of the Gentiles." By comparing the three gospel accounts, we find that these expressions all refer to the same period.

"For in those days shall be affliction, such as was not from the beginning of the creation... And except that the Lord had shortened those days, no flesh should be saved."

Luke's wording differs from that of Matthew and Mark, but in context this is the only description he gives of the period between the destruction of Jerusalem and the signs of the end. So we have to conclude that "the times of the Gentiles" is the same period as "those days" mentioned in Matthew and Mark.

Notice carefully that there is no predicted period of time called "The Tribulation." Jesus is simply saying that tribulation and affliction would come to the church during those days.

By comparing Luke 21:24 with Revelation 11:2 we learn that "the times of the Gentiles" is a particular period of time that lasts forty-two months. 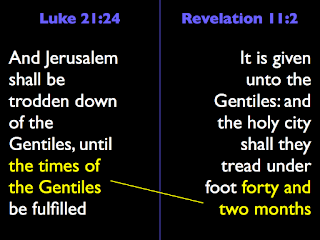