The 400-Year Prophecy and the Fourth Generation

Question:  How long were the children of Israel in Egypt?

To come up with that answer we have to do a few calculations. Let's start with the prophecy given to Abraham:

"And he said unto Abram, Know of a surety that thy seed shall be a stranger in a land that is not theirs, and shall serve them; and they shall afflict them four hundred years; And also that nation, whom they shall serve, will I judge: and afterward shall they come out with great substance. And thou shalt go to thy fathers in peace; thou shalt be buried in a good old age. But in the fourth generation they shall come hither again: for the iniquity of the Amorites is not yet full." Genesis 15:13-16

Two measurements are given:  four hundred years, and four generations.

So what about the 400-year prophecy? Stephen confirmed the accuracy of that time measurement in Acts 7:17. "But when the time of the promise drew nigh, which God had sworn to Abraham, the people grew and multiplied in Egypt." Stephen didn't leave us to guess what that time period was that God had promised Abraham. "And God spake on this wise, That his seed should sojourn in a strange land; and that they should bring them into bondage, and entreat them evil four hundred years." Acts 7:6

In order to reconcile all these statements, we need to isolate the main points:

Paul clarified that the 430 years began with God's promise to Abraham. "And this I say, that the covenant, that was confirmed before of God in Christ, the law, which was four hundred and thirty years after, cannot disannul, that it should make the promise of none effect." Galatians 3:17

Starting from God's promise to Abraham we may count 25 years to Isaac's birth (Genesis 21:5), then sixty years to Jacob's birth (Genesis 25:26), then 130 more years to the time when Jacob's family moved to Egypt (Genesis 47:9). That adds up to 215 years from Abraham's entrance into Canaan until his descendants moved to Egypt. Of the 430 total years, that leaves 215 remaining years as the amount of time the Israelites actually spent in Egypt. That fits well with the time span of four generations. 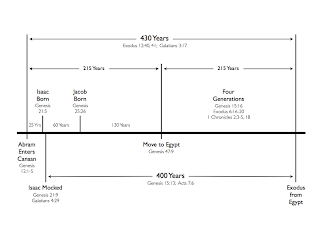