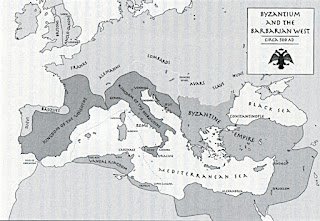 "I do not favour the Heruli as one of the three uprooted powers for the following reasons: (1) It was not the tribe of the Heruli that was destroyed by Theoderic's murder of Odoacer. Odoacer was partly of Herulian descent, true; yet, his soldiers were mercenaries coming from many tribes. There was no such thing as a 'Herulian kingdom'. (2) The fight between Theoderic and Odoacer had nothing to do with the Roman pontiff. The papacy did not gain anything out of the change of rulership from Odoacer to Theoderic."
Posted by Ken LeBrun at 4:45 PM